Zim music star to appear alongside Nine Lives in Leeds

Calling out to all World Music fans in Leeds, renowned Zimbabwean musician, Stella Chiweshe, will be appearing in a rare and intimate solo gig, in a double bill with Nine Lives in Leeds.

To celebrate Refugee Week 2015 and the opening of Nine Lives, Stella Chiweshe, will be playing after the first performance at The Hub, 5pm Sunday 21 June.

The gig is only available in a double bill with Nine Lives. Tickets are Pay What You Decide and available from boxoffice@slunglow.org or on the door prior to 5pm on the day of performance. 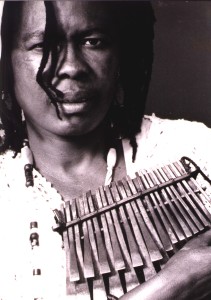 Despite having endured many trials and tribulations,respected veteran Zimbabwe-born singer and instrumentalist Stella Chiweshe has never lost faith in the healing power of music.

Some artists project a stage persona which differs markedly from their everyday personality. Nothing could be further from the truth as far as Stella Chiweshe is concerned. The 68-year-old Shona singer and instrumentalist is the real deal.

Her singing and mbira (mbira dzavadzimu to give it its full name) playing are not just a joy to behold, they generally leave her audiences spellbound and elated. Mbira dzavadzimu is a sacred instrument used by the Shona people of Zimbabwe to call on the spirits of their ancestors.

Chiweshe set out on the global concert circuit in the early 1980s and has released seven albums under her name to date. She is a regular performer at the prestigious WOMAD world music festival, and has toured her inspirational music all over the world. Her endeavour and persistence has opened the door to other women to follow her musical, artistic and traditional social status-defying lead.

Today, Chiweshe is a celebrity back home in Zimbabwe, and in 2014 founded the Chivanhu Trust ‘so that our children will grow up knowing their culture’